Once a month we host our version of the messy church movement called Messy Saturday. And each year in the summer we host a special one, the “Messy Olympics” 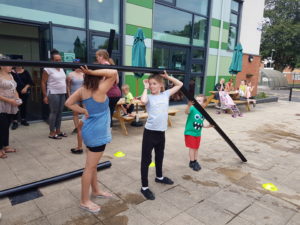 Messy Olympics is different to all the other ones during the year, because we don’t have craft activities to join in, we have games. Loads of team games where team competes against team and a big head-to-head game for all teams at the same time as finish. Normally we have some kind of celebration and a meal at the end. This year we had a BBQ with Burgers and ice cream afterwards – yummy 🙂 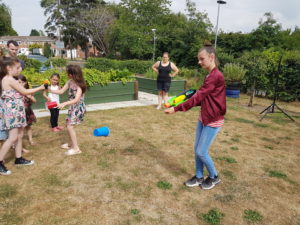 But winning isn’t just winning, this year the teams got judged on their performance as a team, obviously without them knowing, so it wasn’t very important who could transport the most amount of water with some guttering, who scored the most points at battleships, who moved the cup the quickest or which team could throw a water balloon the furthest and catch it again (both with a towel). It was important which team did all this well AND worked the best as a team.

But before we came to read out the scores, we had our final head to head relay race. 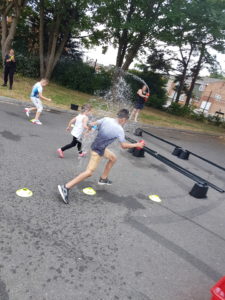 Who was able to transport the biggest amount of water with a cup on their head (which had holes in) from one bucket to another through an obstacle course…? Obviously it all escalated into a massive water fight where barely anyone got spared. The good thing though, we had such a good weather, that you were kind of dry after 10 minutes. 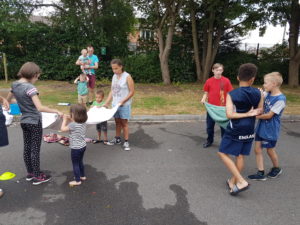 It was all very good fun, a delicious BBQ and a brilliant last Messy Saturday for our interns Naomi and Valentin (who obviously got soaked as well 😉 )

This website uses cookies to improve your experience while you navigate through the website. Out of these, the cookies that are categorized as necessary are stored on your browser as they are essential for the working of basic functionalities of the website. We also use third-party cookies that help us analyze and understand how you use this website. These cookies will be stored in your browser only with your consent. You also have the option to opt-out of these cookies. But opting out of some of these cookies may affect your browsing experience.
Necessary Always Enabled
Necessary cookies are absolutely essential for the website to function properly. This category only includes cookies that ensures basic functionalities and security features of the website. These cookies do not store any personal information.
Non-necessary
Any cookies that may not be particularly necessary for the website to function and is used specifically to collect user personal data via analytics, ads, other embedded contents are termed as non-necessary cookies. It is mandatory to procure user consent prior to running these cookies on your website.
SAVE & ACCEPT